By now you know, on December 31, 2019, China reported a cluster of cases of pneumonia in people associated with the Huanan Seafood Wholesale Market in Wuhan, Hubei Province.  A week later, Chinese health authorities confirmed that this cluster was associated with a novel coronavirus now identified as COVID-19.  By January 30, 2020, a total of 9,976 cases had been reported in at least 21 countries (primarily concentrated in China and eastern Asia), according to the New England Journal of Medicine.  During January, markets mainly shrugged off the coronavirus as an isolated Chinese/emerging markets issue.  The S&P 500 index was flat in January, with the MSCI EAFE and MSCI Emerging Markets indexes dropping 2.0% and 4.7%, respectively.

Even as confirmed cases of the coronavirus grew rapidly in Asia in February, the markets climbed their “wall of worry”.  The S&P 500 hit an all-time high February 19, closing at 3,385.09 (up 5.1% to that point in the month).  The MSCI EAFE gained 1.3% during the same period while the MSCI Emerging Markets was up 3.9%.

The situation began to change last weekend as fresh outbreaks in Italy, South Korea and Iran saw hopes of successfully containing the virus deteriorate greatly.  At last count, confirmed cases now total over 80,000 in over 30 countries, with nearly 3,000 deaths.  This further spreading of the coronavirus finally triggered a selloff in risk assets (and a corresponding higher demand for safer assets like U.S. Treasuries) this week.  The S&P 500 has fallen 10.7% in the first four trading days this week and is off over 12% from its high last week.  The MSCI EAFE and MSCI Emerging Markets have also fallen 8.0% and 9.2%, respectively, this week.  These are the largest losses in the markets since the end of 2018.

If history is any indicator of how the markets respond to the uncertainty of these epidemics, things aren’t as dire as they seem.  While the short-term can be very volatile and unsettling, markets have typically recovered once there is more clarity.  The table below shows a list of epidemics dating back to the early 1980s and the returns of the S&P 500 from the end of the epidemics.  There was short-term volatility in the markets, on average, but markets produced positive returns in the following six and twelve months.

The ends of these epidemics weren’t always the catalysts for future returns since, for example, the HIV/AIDS epidemic ended during a severe global recession and the end of the swine flu coincided with the end of the Great Recession.  However, markets like certainty and we believe that once they get more clarity on the scope and magnitude of the economic impact from the outbreak of the coronavirus, investors will recognize they overreacted and once again invest in equities. 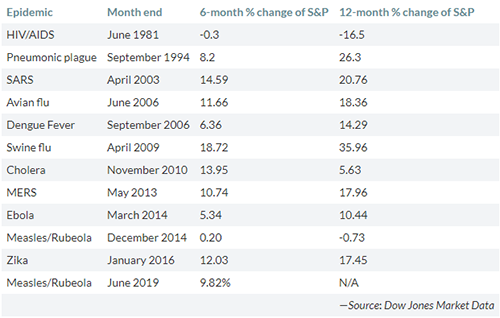 It’s also worth noting that as unpleasant as they are, market corrections of 10% to 20% are normal.  The chart below shows the maximum drawdown of the S&P 500 from a closing high for each calendar year since 1928.  The average drawdown in a given year during this span has been a decline of 16.3%, and in 58 of the 92 years, there has been a decline of at least 10%.  The 2018 drawdown of 19.8% is the only one above the long-term average over the last eight calendar years and in three of those years we didn’t experience even a 10% drawdown.  So, while the recent correction in equity markets is disconcerting (especially since it is tied to something as serious as the coronavirus), there are some positive takeaways.  First, a drawdown greater than 10% is to be expected every 20 months on average, so this is normal market behavior.  Second, all previous corrections have been completely erased by a bull market rally. Finally, over the past 50 years, the S&P 500 has spent almost three times as many days going up compared to the time it’s spent in correction.

A Word in Closing

As we’ve noted in the past, short-term volatility creates long-term opportunity.  Admittedly, in market downturns, it is emotionally challenging to maintain discipline in the short-term.  However, whether it is from the tax savings of loss harvesting, adding additional shares of stock investments through opportunistic rebalancing, or investing new cash at current lower prices, corrections create opportunities that will be beneficial in the longer-term.  What over 35 years of experience has taught us is that maintaining discipline and not acting on emotions is the real key to a successful, long-term investment plan.

As always, we thank you for your continued confidence!